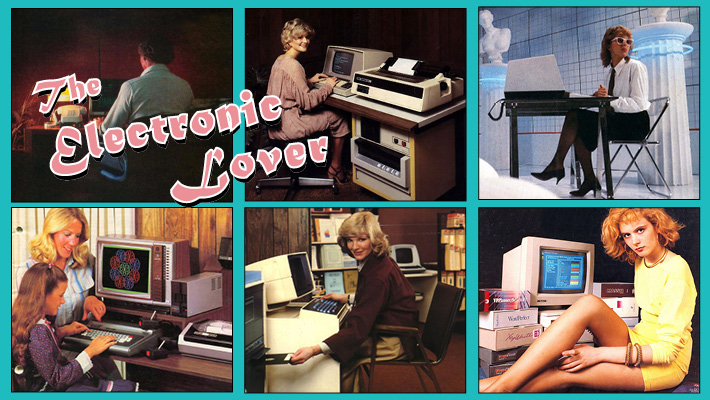 T-Rex (Theresa) confides in Talkin’ Lady (Joan) about her frustrations as a disabled woman, and confesses a desire to someday meet some of her online friends IRL. Talkin’ Lady encourages her to conquer her fears and expand her horizons beyond the computer screen.

Narrator: You’re listening to episode 3 of The Electronic Lover. If you haven’t heard the previous episodes, we recommend catching up first. We’re back in the women-only chatroom where Theresa, T-Rex, has come to find her friends at the end of a tough day

Theresa: What a day.

Frankie: Word to your mother.

Theresa: What a day.

Frankie: You said it.

Theresa: The kind of day that can only end with Tchaikovsky’s Waltz of the Flowers. And me in my mukluks.

Theresa: A soft, woven slipper-boot native to Arctic indigenous people. My mother bought them on a trip to Alaska.

Theresa: I am a lonesome dove

Frankie: Oh, to have the time to be lonely!

Theresa: Careful what you wish for. Time is a funny thing…

When I awake, I feel time

The time it takes to get out of bed

Pull myself up with a grab bar

Swing my legs over and get to the edge

Hold my crutches and breathe in deep

A chair in the shower

Zip my zippers with one hand

Drive the car with a lever and switch

I know that I’m fortunate

To have this beautiful brain

At work in her lab

Joan: What is your heart’s desire?

Joan: I won’t tell a soul

Theresa: Promise not to laugh?

Theresa: This weekend there’s a gathering…

Theresa: Of friends I found in a chatroom

Joan: Wait – another chatroom? Are you cheating on us, dear T-Rex? Wink wink. Tell me more.

Theresa:  At home, I live in my screen

My feelings poured straight into the glass

I have learned who I am there

Joan: You are seen

Theresa: But out in the world

I am weak, I am slow

And it’s so hard to move

From one place to another

I would like to go to the city alone

Shake hands with my friends

Put faces to their names

Joan: You can do it!

Theresa: No I can’t!

Joan: I will tell you a secret—

I wanted to die!

I brought myself back

Promised to bring others with me

Now is your time

And I will step in!

I will step up for you!

Joan: What are you waiting for?

Joan: Seize the day before it seizes you, T-Rex!

Theresa: I think I should go now… signing off.

Narrator: T-Rex is close to tears. She shuts down her computer and grabs leftovers from the fridge. Overcooked spaghetti and half a turkey meatball. But Talkin’ Lady’s words are still with her. She goes back to her office, logs back on and sends her a private message. T-Rex private to Talkin’ Lady.

Theresa: Maybe if you actually knew how I felt, you wouldn’t have made such a callous remark. I would like an apology!

Theresa: I think Talkin’ Lady is being insensitive, and might need a reminder to be more respectful

Margot: Oh no, T. What happened?

Narrator: Margot reviewed the chat, but didn’t find anything that was even close to violating community standards. But Theresa was hurt and Margot tried her best to soothe her.

Margot: Theresa, I think she was advising you to live boldly.

Theresa: She was telling me to kill myself!

Theresa: I thought it happened waterskiing?

Margot: She might seem harsh, but her intentions are pure. It has been a difficult journey and she wants to help others. Cut her some slack.

Narrator: Talkin’ Lady apologized to T-Rex and laid out her plan to help her get out to meet her online friends. The following Monday…

Joan: Howdy everyone! Why doesn’t someone ask T-Rex what she did over the weekend?

Frankie: Well, what did you do?

Theresa: I think I can say without exaggeration, without hyperbole, without gilding the lily, that my entire life has changed for the better! I feel like I’m flying!

Joan: Tell them or I will!

Theresa: Very early in the morning

The dew was still on the grass

I was making my tea

When I saw a van pull into the drive

Theresa: In that moment, I realized that Talkin’ Lady had been serious

I had packed my bag

Just in case she kept her promise

Frankie: Uh-huh, then what?

Theresa: We drove into the city

Arrived at the hotel

Where a transport chair was waiting like a chariot!

Joan: That was she wouldn’t have to navigate the crowds on her crutches

Theresa: I freshened up, and picked up my registration badge—

Theresa: I was transported to the Star Trek Convention!

Theresa: I had been hearing about it for years

Frankie: You are such a nerd!

Theresa: It was a dream come true!

I met all of my Trekkie chatroom friends

We ate burgers and chili, french toast and milkshakes at midnight

And the hotel sheets were so soft!

Theresa: And I got autographs from Sulu and Uhura. And…..

Theresa: And an *interesting* man asked me out for drinks

Joan: And tell them what happened—

Susan: So happy for you

Frankie: So proud of you

Theresa: I couldn’t have done it without Talkin’ Lady! She made my dreams come true!

Joan: And this is where the fun really starts.

Frankie: Do you have a plan? For the guy?

Joan: You can all leave it up to me. T-Rex, it’s time to tap into your power!

Theresa: This is too much excitement!

Margot: Ladies! You have to get over to the etc. forum. Topic started by Shadow Brad is “What’s your most unpopular opinion?” Lots of giggles!

Narrator: There’s a mass exodus, and aside from a few film buffs debating the use of the sand worms in Dune, everyone is cutting loose in the etcetera forum.

Voice: I actually like wearing a condom. I have a latex fetish

Frankie: I don’t care what anybody says, Madonna is extremely talented

Susan: I fell asleep during Koyannisqaatsi ….

Joan: This is fun! Adults shouldn’t dress up for Halloween

Theresa: Lobsters are the roaches of the sea, and only worth consuming as a vehicle for melted butter!

Garrison:  Sometimes I worry if this is getting out of hand!

Narrator: And just as the party was winding down for the night… Talkin’ Lady private to T-Rex.

Joan: So my dear – what do you think you will wear?

Theresa: My goodness, for what?

Joan: For your next date with him

Theresa: I’m so exhausted. 8am meeting with the boss.

Joan: And will you bring up your need for a ramp for the parking lot?

Joan: Remember, you deserve it.

Theresa: Okay, okay! But I’m not the activist type.

Joan: Of course you are. You’re smart and you’re driven and…

Theresa: Joan! Can we continue this tomorrow?

Joan: I can tell you’re beautiful…